Despite its recognition for the democratic institutions that had been built before and since the Pinochet dictatorship, Chile was until Monday among a small and disgraced club of nations that treated women as less than full equals by criminalizing abortion under all circumstances. After historic legislation introduced by President Michelle Bachelet was approved, the Constitutional Tribunal approved the exceptions to the criminalization of abortion. As noted in our editorial in Health and Human Rights, June 2017, the challenge of realizing effective enjoyment of these basic rights for women in the Chilean health system lies ahead. But this is a fundamental step toward real democracy, of all men and women alike.  Alicia Ely Yamin

August 21, 2017, will be a day to remember in Chile—the day in which the Constitutional Court ruled in favor of a Bill, introduced in January 2015 by President Michelle Bachelet, that allows abortion on three grounds: when a woman’s life is in danger, when there are fetal anomalies incompatible with life, and in the case of rape. Chilean women will recover a right that was taken from us as one of the last acts of Pinochet’s dictatorship in 1989. 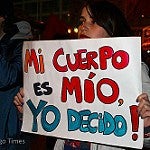 Indeed, therapeutic abortion was legal from 1931 until 1989. As we wrote in our recent paper in this Journal, since then it has not been possible to change this absolute ban despite, among other things, a fierce fight of feminist and women’s movements, international human rights bodies calls to improve the abortion laws, and 70% of people in Chile supporting l

iberalization. Bachelet went further than the 1931 Health Code because she introduced the option for girls, adolescents and women to end a forced pregnancy.

Since 1989 various Bills have been presented to Senate and the Chamber of Deputies to legalise abortion. Most have not even been discussed and the last attempt was defeated in the Senate in 2012. Bachelet’s political determination has been crucial in achieving this week’s result.

As in other parts of the world, the total prohibition of abortion in Chile has never prevented women from undergoing abortions. It is estimated there are 70,000 to 150,000 abortions in Chile every year. Women undergo clandestine abortions and, importantly, their socioeconomic and personal networks play a key role in locating services; working class women face greater risks of health complications, and of being criminally prosecuted. In this way the total ban on abortion exposed an appalling social and gender inequality.

Since January 2015 until 1 August 2017 when it was approved, the Bill was extensively discussed in the Chamber of Deputies and the Senate. A group of Senators and Deputies then filed two constitutional challenges before the law could be enacted.

During the whole period a strong opposition from conservatives and religious groups delayed its approval. Aspects of the original Bill were changed throughout the process, generally making it more difficult to access abortion. In its final form, the first ground allows an abortion when the woman’s life is in danger. Conservatives argued against the reform citing the doctrine of the double effect, that is, practitioners are allowed to provide treatment or perform a procedure that may result in an unintended abortion if the woman’s life or health is at risk. However, even if this were true, not having a regulation often leads to precious time being wasted waiting for the condition of the woman to improve or deteriorate before providing an abortion to save the woman’s life.

The second ground establishes that a pregnancy may be terminated when the embryo or fetus suffers a fatal congenital or genetic structural impairment incompatible with an independent life outside the womb. Under a total prohibition of abortion, women are forced to continue a pregnancy with a non-viable fetus that risks their mental health, and increases anxiety and depression. Health care professionals are not trained to handle these situations; they could not offer women legal options, forcing some of them to act illegally and suggest or refer women to practitioners who could perform an abortion, while others prescribed misoprostol, or induced labor if possible.

The third ground, in the case of rape, was the most contested. In the case of girls aged under 14 years, the gestational period during which an abortion could be conducted was reduced from 18 weeks in the original Bill to 14. This was despite all the evidence presented that in these cases more time is needed because young girls often do not realize that they are pregnant until the pregnancy becomes evident. As one of the authors of this blog (Lidia Casas) said in her presentation to the Constitutional Tribunal “the case of rape has the face of young girl. 87% of sexually assaulted girls are under 14 years old. The Bill will give an option to those girls.”

For now, women in Chile are celebrating this important step towards fulfilling their reproductive rights. Women can decide whether to continue their pregnancy or not in these extreme cases. However, there is still much work to do to fully recognize women’s reproductive autonomy. Implementation of this law is the first crucial step to having access to an abortion when needed. Although the law now allows access to an abortion in limited cases, most women needing abortions in Chile will continue to seek illegal abortions with all their associated risks.

So while this legislative change will not significantly alter the demand for illegal abortions, it represents the possibility that women’s rights are recognized, at least under these three grounds, and suggests that women have equal worth, dignity and rights.

Photo credit: Santiago Times; caption: Women in Chile have been demanding abortion rights for many years

Lidia Casas, LLB, LLM, PhD, is a professor and researcher at the Diego Portales University School of Law, Chile.

Lieta Vivaldi, LLB, MSc, is a PhD candidate in sociology at Goldsmiths, University of London, UK.