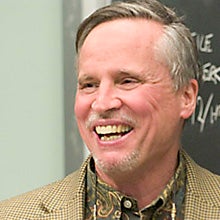 When I first meet Northeastern University law professor Brook Baker, it’s a bitterly cold day in Boston. It’s a relief to escape into the warmth of Baker’s office, tucked away inside Northeastern’s Cargill Hall, where I am to meet with the prominent professor who focuses on intellectual property, access to medicines, and increasing the legal, economic, and policy response to the HIV/AIDS pandemic. Baker’s office is cluttered and cozy, decorated with personal photos, a large tribal rug, and South African ornaments.

The authority with which Baker discusses the core issues of the access to medicines movement reflects a lifetime spent chipping away at the block of pharmaceutical imperialism. He came to health activism after a stark realization about the reality of life in South Africa, where he initially intended to train the next generation of lawyers that would shape the post-apartheid nation. After learning that 26% of his female students would be dead within a few years due to lack of treatment for HIV, he became involved in campaigns for universal access to treatment and care for people living with HIV/AIDS. He has written and consulted on intellectual property rights, free trade and access to medicines with organizations such as the Global Fund to Fight AIDS, UNDP, WHO, OSI, UNITAID, Health GAP, and the Medicines Patent Pool.  He also focuses on strategies for strengthening health systems, and improving health care delivery in developing countries.

Human rights: An absence of enforceability

“The right to health has historically been actualized in the judicial context,” Baker says, “but it can be usefully actualized in legislative battles, law reform battles, which try to achieve more structural change.”

In addition to the absence of enforceability, Baker explains that human rights “lack teeth against many of the main perpetrators who are private actors – international corporations who do the most structural harm to access to medicines.” The state-centric nature of human rights obligations allows non-state actors to escape sanctions for human rights abuses, including corporate action which impedes the right to health. Baker explains that efforts within the UN system to extend human rights obligations to corporations have been largely ineffective due to “the lack of enforcement mechanisms and the unresolved question of justiciability in national courts.”

Baker notes that the access to medicines movement has deployed the human rights discourse very powerfully and with significant effect, particularly in terms of HIV. “When you win something like lower prices for [antiretroviral drugs] or when you defeat an effort to have a particular IP provision in a trade agreement, you are changing the actual structures that affect the right to health.” He believes that the social movement “has the teeth at present” and thinks that using the human rights discourse as the basis for social movements  should continue to be the primary focus.

Historically, Baker says, health movements have focused on judicial interactions by taking cases to court, with limited effect. Increasingly, however, the social movement is maturing towards law reform through legislative rather than judicial means. He says this shift arises from a growing realization that many of the negative structural elements that affect the right to health arise from legislative sources. In line with this new approach, health activists in South Africa are currently trying to amend national patent laws to prevent evergreening by multi-national pharmaceutical corporations.

“The right to health has historically been actualized in the judicial context,” Baker says, “but it can be usefully actualized in legislative battles, law reform battles, which try to achieve more structural change.”